These books are available at the Lynnfield Public Library and are great for middle schoolers looking for historical fiction. Click the book cover or title to go directly to our catalog, where you can put the book on hold for pick up. Many of the books are also available as ebooks and audiobooks from Libby or hoopla. The books are ordered from newest to oldest, so new additions to this list will always be at the top! Email Lauren at lfox@noblenet.org for more recommendations or information about any of these books.

A Ceiling Made of Eggshells by Gail Carson Levine:

Surrounded by her large family, Loma is happy living in the judería of Alcalá de Henares, Spain, and wants nothing more than to someday have a family of her own. Still, when her intimidating grandfather, her Belo, decides to bring her along on his travels, she’s excited to join him. Belo has the ear of King Ferdinand and Queen Isabella, and Loma relishes her adventures with him, adventures that are beyond the scope of most girls of the time. She soon learns just how dangerous the world is for the Jews of Spain, and how her grandfather’s influence keeps their people safe. But the older Loma gets, the more she longs to realize her own dreams—if Belo will ever allow her to leave his side. 5/12/2020

Mary Lambert has always felt safe on her beloved island of Martha’s Vineyard. Her great-great-grandfather was an early English settler and the first deaf islander. Now, over a hundred years later, many people there — including Mary — are deaf, and nearly everyone can communicate in sign language. Mary has never felt isolated. She is proud of her lineage. But recent events have delivered winds of change. Mary’s brother died, leaving her family shattered. Tensions over land disputes are mounting between English settlers and the Wampanoag people. And a scientist has arrived, hoping to discover the origin of the island’s prevalent deafness. His maniacal drive to find answers soon renders Mary a “live specimen” in a cruel experiment. 3/3/2020

This Light Between Us by Andrew Fukuda:

In 1935, ten-year-old Alex Maki from Bainbridge Island, Washington is disgusted when he’s forced to become pen pals with Charlie Lévy of Paris, France―a girl. He thought she was a boy. In spite of Alex’s reluctance, their letters continue to fly across the Atlantic―and along with them, the shared hopes and dreams of friendship. Until the Japanese attack on Pearl Harbor and the growing Nazi persecution of Jews force them to confront the darkest aspects of human nature. From the desolation of an internment camp on the plains of Manzanar to the horrors of Auschwitz and the devastation of European battlefields, the only thing they can hold onto are the memories of their letters. But nothing can dispel the light between them. 1/2/2020

Krystia lives in a small Ukrainian village under the cruel and violent occupation of the Soviets in 1941. So when the Nazis march into town to liberate them, many of Krystia’s neighbors welcome the troops with celebrations, hoping for a better life. But conditions don’t improve as expected. Krystia’s friend Dolik and the other Jewish people in town warn that their new occupiers may only bring darker days. The worst begins to happen when the Nazis blame the Jews for murders they didn’t commit. As the Nazis force Jews into a ghetto, Krystia does what she can to help Dolik and his family. But what they really need is a place to hide. Faced with unimaginable tyranny and cruelty, will Krystia risk everything to protect her friends and neighbors? 12/3/2019

The Story That Cannot Be Told by J. Kasper Kramer:

Ileana has always collected stories. Some are about the past, before the leader of her country tore down her home to make room for his golden palace; back when families had enough food and hot water. But some stories can get you in trouble, like the one criticizing Romania’s Communist government that Uncle Andrei published – right before he went missing. Fearing for her safety, Ileana’s parents send her to live with the grandparents she’s never met. But danger is never far away. Now, to save her family and the village she’s come to love, Ileana will have to tell the most important story of her life. 10/8/2019

A Slip of a Girl by Patricia Reilly Giff:

It’s 1811, and for Anna, the family farm has always been home… But now, things are changing. Anna’s mother has died, and her older siblings have left Anna and her father to care for a young sister with special needs. They’re in danger of losing their land as poor crop yields leave them without money to pay their rent. When a violent encounter with the Lord’s rent collector results in Anna and her father’s arrest, all seems lost. But Anna sees her chance and bolts from the jailhouse. On the run, Anna must rely on her own inner strength to protect her sister–and try to find a way to save her family. 9/24/2019

All the Greys on Greene Street by Laura Tucker:

SoHo, 1981. Twelve-year-old Olympia is an artist, and in her neighborhood, that’s normal. Her dad and his business partner Apollo bring antique paintings back to life, while her mother makes sculptures, leaving Ollie to roam New York with her friends Richard and Alex. Then everything falls apart. Ollie’s dad disappears, leaving her only a cryptic note and instructions to destroy it. Her mom has gone to bed, and she’s not getting up. And someone keeps calling, looking for a missing piece of art. Olympia knows her dad is the key — but first, she has to find him, and time is running out. 6/4/2019

Sweeping Up the Heart by Kevin Henkes:

Amelia Albright dreams about going to Florida for spring break like everyone else in her class, but her father has decided Florida is too much adventure. Now Amelia is stuck at home with him and her babysitter, the beloved Mrs. O’Brien. The week ahead promises to be boring, until Amelia meets Casey at her neighborhood art studio. Amelia has never been friends with a boy before, and the experience is both fraught and thrilling. When Casey claims to see the spirit of Amelia’s mother, who died ten years earlier, the pair embarks on an altogether different journey in their attempt to find her. 2/19/2019

The True History of Lyndie B. Hawkins by Gail Shepherd:

When it comes to American history or defending the underdog or getting to the bottom of things, no one outsmarts or outfights Lyndie B. Hawkins. But as far as her family goes, her knowledge is full of holes: What exactly happened to Daddy in Vietnam? Why did he lose his job? And why did they have to move in with her grandparents? Grandma Lady’s number one rule is Keep Quiet About Family Business. But when her beloved daddy goes missing, Lyndie faces a difficult choice: follow Lady’s rule and do nothing, or say something and split her family right down the middle. 2/16/2019

The Night Diary by Veera Hiranandani:

It’s 1947, and India, newly independent of British rule, has been separated into two countries: Pakistan and India. The divide has created much tension between Hindus and Muslims, and hundreds of thousands are killed crossing borders. Half-Muslim, half-Hindu twelve-year-old Nisha doesn’t know where she belongs, or what her country is anymore. Nisha and her family become refugees, The journey is long, difficult, and dangerous, and Nisha can’t imagine losing her homeland. But even if her country has been ripped apart, Nisha still believes in the possibility of putting herself back together. 3/6/2018

Betty Before X by Ilyasah Shabazz with Renée Watson:

In Detroit, 1945, eleven-year-old Betty’s house doesn’t quite feel like home. Her mother loves her, but she can’t shake the feeling that her mother doesn’t want her. Church helps those worries fade, if only for a little while. The singing, the preaching, the speeches from guest activists like Paul Robeson and Thurgood Marshall stir African Americans in her community to stand up for their rights. Betty volunteers for the Housewives League, an organization that supports black-owned businesses. Soon, the American civil rights icon we now know as Dr. Betty Shabazz is born. Based on a true story. 1/2/2018

My Brigadista Year by Katherine Paterson:

It’s 1961, and when thirteen-year-old Lora tells her parents that she wants to join Premier Castro’s army of young literacy teachers, they’re angry. Lora has barely been outside of Havana — why would she throw away her life in a remote shack with no electricity? Lora’s abuela takes her side, but she tells Lora to come home if things get too hard. But how will Lora know when that time has come? Lora begins teaching fellow Cubans of all ages to read and write, while helping with the work of their daily lives and sharing the dangers posed by counterrevolutionaries hiding in the hills nearby. 10/16/2017

In 1942, when Mahatma Gandhi asks Indians to give one family member to the freedom movement, ten-year-old Anjali is devastated to think of her father risking his life. But it turns out he isn’t the one joining. Anjali’s mother is. And with this change comes many more adjustments designed to use “ahimsa” – non-violent resistance – to stand up to the British government. Anjali is forced to get over past prejudices as her family becomes increasingly involved in the movement. When Anjali’s mother is jailed, Anjali must take over her mother’s work – her small part of the independence movement. 10/2/2017

Three different kids. One mission in common: ESCAPE. Josef is a Jewish boy in 1930s Nazi Germany. With the threat of concentration camps looming, he and his family board a ship bound for the other side of the world. Isabel is a Cuban girl in 1994. With riots and unrest plaguing her country, she and her family set out on a raft, hoping to find safety in America. Mahmoud is a Syrian boy in 2015. With his homeland torn apart by violence, he and his family begin a long trek toward Europe. All three young people will go on harrowing journeys in search of refuge. But for each of them, there is always hope. 7/25/2017 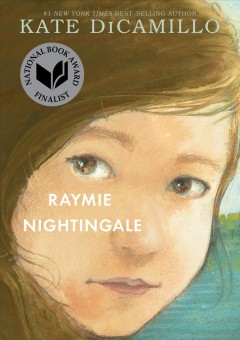 Raymie Clarke has come to realize that everything depends on her. And she has a plan. If Raymie can win Little Miss Central Florida Tire 1975, then her father will see Raymie’s picture in the paper and (maybe) come home. Raymie will have to do good deeds and learn how to twirl a baton. She also has to contend with Louisiana Elefante and Beverly Tapinski, who’s determined to sabotage the contest. But as the competition approaches, loneliness, loss, and tough questions draw the girls into an unlikely friendship — and challenge each of them to come to the rescue in unexpected ways. 4/12/2016

The Marvels by Brian Selznick:

The journey begins at sea in 1766, with a boy named Billy Marvel. After surviving a shipwreck, he finds work in a London theatre. There, his family flourishes for generations as brilliant actors until 1900, when young Leontes Marvel is banished from the stage. Nearly a century later, runaway Joseph Jervis seeks refuge with an uncle in London. Albert Nightingale’s strange, beautiful house, with its mysterious portraits and ghostly presences, captivates Joseph and leads him on a search for clues about the house, his family, and the past. 9/15/2015

Inside Out & Back Again by Thanhha Lai:

For all the ten years of her life, Hà has only known Saigon: the thrills of its markets, the joy of its traditions, and the warmth of her friends close by. But now, in 1975, the Vietnam War has reached her home. Hà and her family are forced to flee as Saigon falls, and they board a ship headed toward hope. In America, Hà discovers the foreign world of Alabama: the coldness of its strangers, the dullness of its food . . . and the strength of her very own family. 2/22/2011

Staff are available to answer calls and emails.
Monday, Tuesday, Thursday: 9am - 7pm
Wednesday and Friday: 9am - 5pm
Saturday: 9am -1pm
Sunday: CLOSED